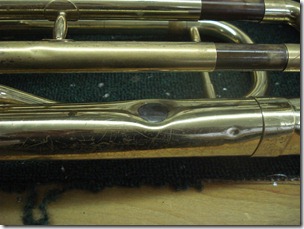 Left Pic – Damage to the upper branch on a Yamaha Euphonium. The brace dented the tubing when the damage occurred. There’s no easy access to this area, without unsoldering major parts of the horn, and the brace can’t be re-soldered with the dent in there. 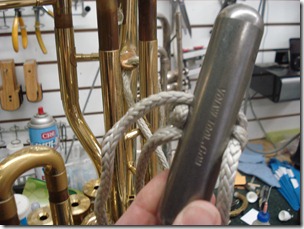 Left Pic – Using my slide puller(a soft rope with a weight), I’ve looped the rope through the strap ring. Using the weight, I can now “snatch” the dent back up into roughly it’s original position.

Right Pic – The dent is now “mostly” out. I don’t have to have it our totally, just enough so the brace will reach. 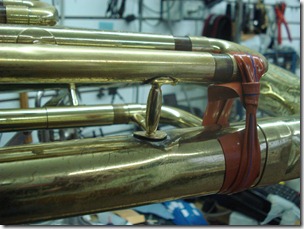 Left Pic – I’ve removed the strap ring, and now am soldering the brace back into position. By removing most of the dent, I’m able to solder the brace without any strain(pulling the pieces together). Soldering something back “strained” almost always leads to the solder joint failing down the road.